I get lots of unsolicited mail everyday, but this one stuck out:

A friend of Bro. Juniper directed him to your website and he called me over to the Macintosh to exclaim that I was producing videos after hours, so to speak. We all got a great chuckle out of that, but when Bro. Juniper ran the video on his Macintosh screen, I was taken aback, for the images did delight me on the surface, but beneath the surface they reminded me of some of the interior images that I experienced on my recent trek across the desert. Of course those images were not of modernity, but of a sort of montage of transcendental nature, whereby the quarks and elemental particles of nature seemed to paint images upon the Milky Way, in a sort of transparent, and luminous, way. Yes, these interior images were inside my skull while I was stretched out on the sandy dune at midnight of a new moon, whereby the galaxies and stars all seemed to be within the reach of my outstretched hands. And the music played with the video is quite nice. I wish you the best in your artistic ventures, and hopefully through your art you may catch glimpses of God.

"Our House": Day One

Today's recording session was postponed for Arta and Mark to participate in a protest downtown. Steven showed up to the studio, anyway, and recorded guide drums and piano for "Our House."

Mark, Steven and Arta played through "Our House" and the whistling song to prepare for tomorrow's recording session. The rehearsal then degenerated into an oldies jam session, with a cover of Doobie Brothers' "Long Train Runnin' (Without Love)" as the highlight.
Posted by Neon Phosphor at 10:58 PM 1 comment:

In an occurrence as rare as the alignment of four planets, the original Tonics are going to be in the same city for the next few days. Mark's coming back for spring break, so we might have a chance to practice new songs. Unfortunately, Alek is rumored to be out of town, so I can't boast that all five Tonics are simultaneously in the same town. That's why we have two drummers.
Posted by Neon Phosphor at 11:09 PM 1 comment:

"I have a question."

"Oasis recently loaned their song, 'All Around The World,' to an AT&T advertising campaign. Are the Tonics considering a similar deal with a transnational corporation?"----Transnational, you slimy trollop, what kind of a ponce are you?

"I'm sorry?"----Ah, yes. While I cannot disclose the details of any negotiations regarding the possible use of our music for promotional purposes, I can tell you that the Tonics will happily consider any commercial arrangements that are mutually beneficial to all parties involved.

"Very good, sir. I happen to be a representative of Cingular and I would like to discuss the licensing of a couple of your songs as ringtones."----Go make your own ringtones, you great poofy poonagger!

"I beg your pardon?"----Ringtones, yes! I am very flattered by your offer, but I must kindly refuse. You see, the band does not appreciate having their songs turned into 15 second clips. But nothing to do with you, my good fellow.

"Well, I can't help noticing that you insult me and then you're polite to me alternately."----Of course I did. Our conversation was mostly lifted from this Monty Python sketch.
Posted by Neon Phosphor at 9:22 PM 1 comment:

This is the link to the "Bartleby" video in Quicktime format. I believe it requires the latest version of Quicktime; otherwise you're going to see a blank screen.
Posted by Neon Phosphor at 12:27 PM 1 comment:

Directed by our drummer-in-exile Ian Asbjornsen, the "Bartleby" video features the cube, a helicopter and a psychedelic blimp. It's a lot like Sculpted Static's "Apart" video, except without us in it. Ian is currently converting it to a more Internet-friendly format. In the meantime, enjoy the four vidcaps below. 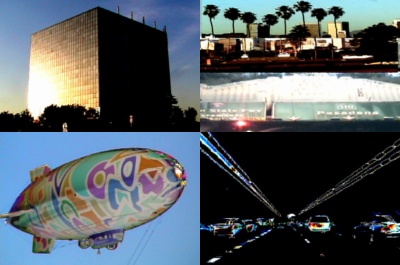 "Is your keyboardist the same Stephen Chow from the kung-fu movies?"

----No, and to avoid any more confusion, Steven has decided to adopt a totally random stage name. He shall henceforth be known as Engelbert Humperdinck.
Posted by Neon Phosphor at 8:54 PM 1 comment:

"I think Sculpted Static was an awesome name! Why did you guys change it?"

----We didn't change our name. We quit Sculpted Static and formed a new band called the Tonics.

"Then why is 'Thank You,' a recording from Sunny Ash, on your new album?"----The real question is, how did a Tonics song get onto a Sculpted Static album in the first place?
Posted by Neon Phosphor at 10:58 PM 1 comment:

Yesterday's post generated a lot of controversy, but guess what? All great art is controversial. For instance, Rage Against the Machine at Lollapalooza 1993. John Lennon claiming the Beatles are bigger than Jesus. Catcher in the Rye. Not quite Salinger masterpieces, but close, are two demos recorded recently: Mark's "Future Four Four" and Steven's Stereolab cover "Les Yper Sound."
Posted by Neon Phosphor at 8:14 PM 2 comments:

Today's musical spotlight is on Green Day - Wake Me Up When September Ends.

"Oh my god, I hate Green Day. You are totally scraping the bottom of the barrel."----Okay. But here is a song that you can find everywhere, from KROQ (new rock) to KBIG (upbeat favorites). What makes it such an enormous and ubiquitous hit?

"A media conglomerate in control of production, broadcast, press, retail, and everything in between."----Sure, but hear me out. There are lessons to be learned from this track.

"Wake Me Up" uses a distinctly 1960s production style. This is unusual since today's music mostly borrows from the 80s. Anyway, the first 1:30 consists of just acoustic guitar and strings. The strings are mixed so low to be almost unnoticeable, but keeps the track sounding "produced" instead of indie rock. But uncharacteristic of anything recorded since the 70s, there's a host of weird instruments filling up the very high end. They include: a xylophone, tambourine and other percussion instruments taken straight from Phil Spector's stash. No, I'm not talking about his stash of firearms. I'm talking the box where he keeps his percussion. You know, like triangles and maracas and shit.

Around 1:30, Green Day avoid diving into hard rock mode like with the flip of a switch from the bridge to neck pickup. It's more like switching from the bridge to the both pickups. We hear the bass drums and electric guitar knocking tentatively on the door of hard rockness (like knocking four times on the door of unhappiness, or knock-knock-knocking on heaven's door. or knock knock, who's there, Anita! Anita who? Anita new string for my guitar!!!!!!!), before the whole band breaks through with full heaviness. The same idea is why Radiohead's "Creep" was such a success: the hook was Jonny Greenwood's ker-crunch right before the chorus. It's true, there's no other hook.

At 3:14, we hear the obligatory but often welcome "eye of the storm." That is, when the band suddenly goes quiet for a few lines before getting heavy again. It's a rock and roll cliche, but one of the good ones to keep the dynamics interesting. We do it on "Sunday Night" and "Hamlet." Radiohead did it on "My Iron Lung." Lots of other examples but I can't name them off the top of my head.

So next time you hear it on the radio, don't go for the dial. Try to appreciate what makes this song so popular. Especially when you're stuck in an office which plays KBIG and you're forced to listen to it.

Today I received notice that sculptedstatic.com has expired. It's true: this is now a dead link.
Posted by Neon Phosphor at 9:35 PM 2 comments:

"Why aren't you playing at Coachella?"

----Check your volume control. The album is best heard loud, and on good speakers. Also, you will need two functioning speakers to get the stereo effect.

"Excuse me, I have a question."

----Why waste it on us? If you have the energy, why not ask our president why we went to war? Or why he's spying on us? Or why we need a president to begin with? Those are far worthier inquiries than the one you will introduce presently.

"Is it true that Tonics frontman Mark Williams told the media, and I quote, it's going to be a few years before you see us again... people are fed up with us - and so are we?"----That is almost correct. The speaker was actually Chris Martin of Coldplay.
Posted by Neon Phosphor at 8:55 PM 1 comment:

The Tonics continue setting up the foundation for a post-Get Things Done world as Steven makes a demo of a new song called "Nothing Matters."
Posted by Neon Phosphor at 10:31 PM 1 comment:

"Word on the street is that a music video is in the works..."

"Why are you evading my question?"----Because you weren't posing a question, but merely an observation regarding the street. This one, however, is a question. That's why you're getting a straight answer now.
Posted by Neon Phosphor at 10:41 PM 3 comments:

"What is Neon Phosphor?"