"Why don't you send Mark to American Idol?"

"Are you taking a break or something? What's with the inactivity?"

----No, we're planning to abandon music and devote our complete attention to this blog. You know, blogs having been all the rage the last few years.

The science of (s)hit songs

Researchers at Columbia University (where the "Lucy Tricked Me Into Something" lead vocals were recorded) did a study that shows our preference for music is affected by the preferences of others.

[W]hat drives participants to choose low-quality songs over high-quality ones?

"People are faced with too many options, in this case 48 songs. Since you can't listen to all of them, a natural shortcut is to listen to what other people are listening to," Salganik said. "I think that's what happens in the real world where there's a tremendous overload of songs."

Alternatively, Salganik said, a desire for compatibility with others could drive the choice, since much of the pleasure from listening to music and reading books stems from discussing them with friends.

In other words, this study is stating the obvious. They should do another study where they make a mainstream radio station play more good music and see if more people tune in. 'Cause they would. People aren't fools that the record industry takes them for. They can decide for themselves what's good and what ain't.

It's very sad when stations like KRTH 101.1 FM change their playlists to play songs from 1964 to 1979, with a focus on the latter half of that range. Who told them to? And did they think people who listened to pre-1964 music are dying off or something? Where are we going to get our doo-wop, still one of the greatest forms of music ever? Have we forgotten about Chuck Berry, Ritchie Valens, Buddy Holly and the Big Bopper?

And everyone knows that the only '70s music worth listening to are shit like non-prog classic rock, Bowie, Queen, T-Rex, etc. And yet, none of these artists are featured on KRTH. Instead we get a lot of Elton John and disco shit and they don't even play the original version of "Candle In The Wind" anymore. They play this stupid live version. I mean, if you're going to do obscure shit, why not play some obscure shit from great bands like the Zombies and the Velvet Underground. Okay, the Velvets might be atonal and noisy, but the Zombies' Odessey and Oracle album is one of the most listenable, melodic albums ever. Why don't they ever play it? Because the people in charge of Infinity Broadcasting and Clear Channel are fucking idiots.

Speaking of idiotic, you guys remember what Clear Channel did after 9/11, right?

At least KOLA 99.9 FM goes on random play at night. Once I heard them playing "Suspicion" by Terry Stafford. That's a great song, folks, by a singer who sounds a lot like Elvis Presley.

Wait a minute, when was the last time we heard the King on KRTH? They don't play him nearly enough, if at all. KOLA, on the other hand, recently picked up a habit of playing "Kentucky Rain," which is a good song but not as rock-and-roll as the stuff from his "thin" era.
Posted by Neon Phosphor at 10:27 PM 1 comment:

Our keyboardist and 46% of the songwriting team turns 23 today.
Posted by Neon Phosphor at 11:38 PM 2 comments:

Mark got a faster computer and produced a demo called "Hifi."
Posted by Neon Phosphor at 8:54 PM 1 comment:

"With the CDs made, could stardom be close to the Tonics?"

50 copies of our album 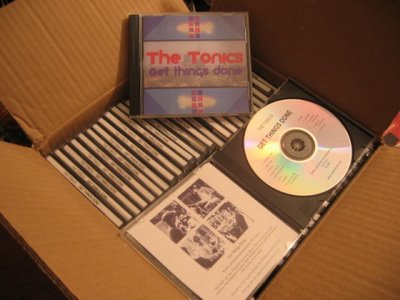 "What do you think of your musical contemporaries?"

----They're playing this song on KROQ right now, from a band called She Wants Revenge. From the San Fernando Valley, and they're supposed to be the next big thing. But I just don't understand why anyone would get off on a song with misogynistic, abusive lyrics such as "I want to fucking tear you apart." I mean, I fear for a generation of music fans walking around with a hook like that stuck in their heads. Yes, free speech, artistic expression, and all that, and I shouldn't judge bands by their one big hit, but I think musicians are not trying hard enough and all they do is bitch, bitch, bitch, I hate this, I hate that. Dudes, when you're rich and young, shouldn't you be having fun? The Tonics, on the other hand, are fun. Just listen to tracks 1-5, 7, 12-13 of our new album.

"Isn't this just sour grapes? I don't see the Tonics anywhere on the charts."----Patience, we'll be there as soon as we get our 50 CDs and we make one last visit to Kinko's. Oops, make that FedEx Kinko's.
Posted by Neon Phosphor at 9:50 PM 2 comments:

DJ Polar Bear, also known as our drummer Ian Asbjornsen, did a remix of "Elegy For Anne Bancroft." It might be worth listening to if you're bored of the minimalist acoustic version.

Celebrity endorsements*:
Ian: "I randomly felt like remixing it and I think it turned out really well."
Steven: "It's like the original, except with a beat and synths."
Arta: "The best part is still my hot strumming."
Mark: "What, I still haven't played on this one."
Alek: "That's right, Ian... stay away from the drum stool."

* Quotes dramatized. May not have been said.
Posted by Neon Phosphor at 9:39 AM 1 comment:

The Tonics have hired DiskFaktory to produce 50 CDs.
Posted by Neon Phosphor at 9:37 PM 1 comment:

If you're a diehard Tonics fan, you know that I was once a song. But you don't have to be Jimi Martinez to know what I'm talking about. I am still available for download on Sculpted Static's Soundclick page.

Sculpted Static's first album, Sound Check, was about to get mastered when Mark vetoed "Lost Child." Mark wanted to record a new composition, "Velvet Ropes," to replace the ill-fated atmospheric Radiohead impersonation. But then Mark got the cold or something, and missed the recording session. Left without a song, Arta and Steven jammed me up on the spot, and gave me ridiculous lyrics like "He slips back... all alone inside/ With the liquor he borrowed from the convenient store./ Oh, it was so convenient." Another line was lifted from the Longman English Dictionary: "He said people/ Who torture people/ Are the scum of the earth." Incidentally, the same dictionary provides the following usage sample of "fuck": "I got my fucking foot fucking caught in the fucking chair, didn't I?"

So, anyway, Arta and Steven poured a lot of wall of sound shit over me. Flutes, organs, recorders, five-part guitars. Steven used his old computer mic for his vocals because Mark had conveniently borrowed the $30 RadioShack mic. The result was an overproduced, unlistenable heap of shit.

But that's when the reviews started pouring in. "Neon Phosphor" became everyone's favorite song on the album. On the other hand, the obvious hits ("Narc," "Telegraph Avenue," "Mad Men") caught no one's attention. Well, except Jimi, who still swears by "Mad Men." The band was really confused.

There's a happy ending, though. Recently, my chords and guitar riff were cannibalized for the vastly superior "Elegy For Anne Bancroft." Score one for the good guys and Neon Phosphor.
Posted by Neon Phosphor at 10:13 PM 1 comment:

"Why didn't you win a Grammy last night?"

----The 2006 Grammy Awards only considered songs and albums that were released between October 2004 and September 2005. Unfortunately, Get Things Done was released outside that window, in December 2005. We will, however, be eligible to win a bunch of awards at next year's Grammies. Specifically, these are the awards we expect to get:

Great moments in rock and roll

"I haven't heard of that song. What the hell is Da Doo Ron Ron?" you ask. Well, let me tell you that you have heard this song, and you've probably heard it a million times on oldies radio. Does this ring a bell?

Anyway, the point of this article is not to draw attention to the freaky lyrics, but to the first four measures of the song. Possibly one of the most energetic single chord intros ever committed to tape. The chord: Eb. The bpm: 150.

Here is the breakdown of instruments and how they're coping. Each measure is 4 counts.

Tenor sax: Plays a whole note during each measure. Only plays Eb.
Piano: Plays triplets (3 notes per count), but alternates between only two chords. I don't know what the chords are called, but they are the bottom two and top two notes of the Eb chord over a full octave, respectively. Whatever, I don't know how to say it more elegantly. Listen to the damn record.
Bass: Plays quarter notes (1 note per count). Only Eb. No fancy riffs here.
Handclaps: Quarter notes (1 clap per count)
Tambourine: Quarter notes, same as handclaps
Bass drum: Same as handclaps and tambourine
Last measure: Snare drums plays triplets, same rhythm as piano.

It's important to download the song or hear it on a CD. When they play it on the radio, the DJs would always talk over the intro, which I think is like defacing a national monument. Like if I were to graffiti "Keep listening for your chance to win on K-Earth 101" on the Vietnam War Memorial. By the way, KRTH 101.1 FM (Los Angeles) plays the stereo versions of the Righteous Brothers' "Unchained Melody" and "You've Lost That Lovin' Feeling." Blasphemy. Speaking of idiot DJs, true fans of the art form do cringe when they hear a DJ introduce a Spector song with something like "now here's a song from the Righteous Brothers" when it's really from Phil Spector without Phil Spector there would be no Righteous Brothers. You know they turned their backs on Spector after their two big hits and recorded "(You're My) Soul and Inspiration" without Spector. So next time you hear that song, remember, it's only an imitation. But the biggest crime ever is how they never play "River Deep Mountain High" by Ike & Tina Turner. That song is the crowning achievement of Spector's career. And no, it's not that "Ain't no mountain high enough" song. This one is completely different. I feel like calling Cindy Davis at KOLA 99.9 FM to make it a lunchtime request, not for me but for the benefit of mankind. Did you know that Phil Spector also produced two of the most influential songs written in the last 35 years: "Imagine" and "Happy Xmas (War Is Over)." Bet you didn't know that, unless you're some kind of super music nerd. You say John Lennon wrote it? Well, John Lennon also wrote "Real Love" and left it in demo form, and "Imagine" could easily have ended up that way or turned into some lame acoustic song.
Posted by Neon Phosphor at 10:08 PM 2 comments:

A good ice cream place next to the Lava Lounge 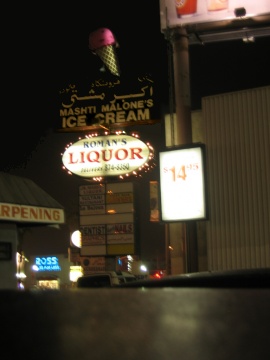 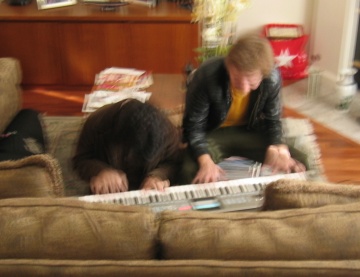 Posted by Neon Phosphor at 10:36 PM No comments: